Well here we are one week down. No big deal? I don’t want to brag but I really thought I hit it out of the park!

Four kiddos times four lunches times four days of school …. Wait this is no place to do math! Unless you are counting the two and a half sandwiches that came home. Which equals about thirty minutes thought on what to put between the bread, fifteen minutes of actual work making the sandwiches ….. I threw out $5.25 worth of food and my time is priceless!! 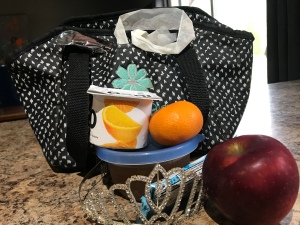 So far so good though the kiddos have managed to remember to empty their lunch kits AND put them away, on the wrong shelf but in the correct cupboard (I’m counting that as a win) So far no one has tossed a spoon in the garbage for me to go digging after, or apples, or granola bars. OH yes, I am not to proud to admit I have and will remove things from the garbage can, give a quick wash and BAMO back in the lunch boxes the next day.
It is a mom perk; my little way of keeping my inner bad ass on point.
My sweet angels (cough cough) have managed to get to bed on or near bed time with only a thousand reasons to get back out of bed. Again, win as this number has decreased from a million.
So far just one make-up incident and shock when I pointed out the eyelashes on the lower right lid were darker than those on the left. Followed by a quizzical look as to what eye lashes actually were… I refrained from stating “Honey if you have no idea what they are called you have no business applying MY mascara… which we both know you cannot spell to the hairs sticking out of your eye lids” Instead I sent her to wash her face. Again, see the win here?

Also, what kind of a daughter am I raising???

EVERYONE knows you apply it at school and scrub the heck out of your face at last recess not to get caught!!!

I have only freaked out one morning last week…. Ok, it was the first day. I was only half a cup of coffee in realized how much I hate making lunches, and lost it over a pair of jeans. Unfortunately, the person who this anger was directed at has MY genes when in fact the true culprit of my disdain does not live here and would have made this purchase under duress. Whining seems to always push fathers over the edge and I’m guessing his eyesight is beginning to fail. I totally get the ripped jean fad. I too own a pair. BUT seriously designers….lets keep the rips at a respectable height on the legs of kids pants. The win here will be mine as well. I do the laundry and they will disappear just like the last pair. Please reference the above comment of my genes. I successfully wore two kilts out of the house each morning and ditched the outer one at the corner. Never forgetting to put it back on on the return trip home. Face scrubbed like that of a new born babe, teeth brushed hands washed as to not smell like cigarettes

She can try but by God I will have the upper hand. At the very least look like I do.

I have been inundated with emails from three separate schools. Some of the notes are the usual back to school info. A few are pdf’s which is ok … but really?? That’s a lot of reading to do between signing papers and all of the other glam mom stuff I get to do. AND believe me its all glamorous. All. The. Time.

I am going to try to be organized this school year.

Well at least until mid November when I run clear out of lunch ideas.

Can you send a kid to school with a potato? Asking for a friend.